Vegetation management crews clear the way for electric service to be restored after an EF5 tornado tears through a Missouri town.

Sunday, May 22, 2011, started out like any other late-spring day in Joplin, Missouri, U.S. Families were grilling out, kids were playing in the parks and, on this day, Joplin High School was holding its graduation at the local university. But, in just 32 minutes, the community landscape and residents’ lives were forever
changed.
At 5:41 p.m., an EF5 tornado, with winds stronger than 200 mph (322 kmph), tore through the town. On the ground for 32 minutes, the storm took its time as it traveled 6 miles (10 km) from the west end of the community to the east, sometimes at speeds of only 5 mph (8 kmph). At certain times, the tornado spanned nearly 0.75 miles (1.2 km) in width.

After the tornado passed, residents emerged from their shelter, shocked at what they saw. Homes, businesses and cars were destroyed. One of the hospitals took a direct hit. More than 160 citizens lost their lives, making it the deadliest storm since 1950. Thousands more sought treatment for wounds at the remaining hospital. The community’s infrastructure also suffered incredible damage. Utility poles were broken, toppled and ripped from the earth. Electric lines littered streets and yards. Water lines were cracked, with water shooting like geysers from the holes. The scent of natural gas permeated the air. 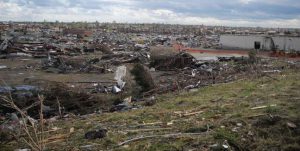 In 32 minutes, a tornado destroyed the town of Joplin, Missouri. In this location stood Home Depot and a grocery store. The Home Depot Foundation made a $500,000 donation to the Community Foundation of the Ozarks for the Joplin Recovery Fund.

“It was obvious we had a big challenge in front of us,” said Scott Mackey, manager of vegetation control for Empire District Electric Co., the electric utility that serves Joplin.
“We knew we would need assistance from our contract crews. They know the Joplin community; many of them live in Joplin and understood the need to quickly jump into action to begin righting what had been destroyed.”

Empire serves more than 165,000 customers in four states: Missouri, Kansas, Oklahoma and Arkansas. Since 2005, the utility’s vegetation management staff has worked closely with Wright Tree Service. Forty crews — including all-terrain mowing crews, transmission crews, distribution crews and response teams — work continuously throughout Empire’s service territory to ensure trees and other vegetation are kept far enough from the lines to limit service interruptions. On this night, Mackey and Jason Grossman, vegetation management coordinator for Empire, knew the job ahead of them was colossal.
Wright Tree Service Division Supervisor Jeff East contacted his general foremen immediately after the storm. Relieved to have reached all of them, he directed them to meet at their show-up site. On the drive there, East was taken aback by the damage.
“I vividly remember seeing a woman and her toddler son walking down a street where the houses had been completely flattened,” East said.

“The boy was clearly hurt, and he was carrying a teddy bear. These are images I’ll never be able to get out of my mind.”

At the show-up site, East had never seen his general foremen so shaken. “This is a tough profession. You rarely see employees in this line of work lose it, but that was a hard day,” he recalled. Gathered together, East and the general foremen made a plan for the work with Empire.

From the remains of a neighborhood, the smoke from St. John’s hospital can be seen 4 miles away.

Several priorities topped the list. Empire spent the first 24 hours after the storm assessing the situation. It had to determine how many vegetation management personnel would be needed and prioritize clearing roads and rights-of-way of fallen trees so line crews could restore power to critical facilities, including Freeman
Hospital and the city’s water supplier.

Debris covered the roads, making access impossible. Crews began by clearing the roads for ambulances and emergency personnel so victims could receive assistance. Navigating the disaster area was difficult because road signs and familiar landmarks had been destroyed. This proved to be an even bigger challenge when trying to explain a location to crews who were not familiar with a specific area of town before the storm.
Communication and coordination were difficult because the cell towers either had been destroyed or were fed from circuits in the path of the tornado, which made coordinating restoration efforts especially difficult.

“We quickly learned that text messages would go into the tornado area, and that seemed to improve some of the communication issues,” Grossman said.

Restoring power to Freeman Hospital was a major focus that first evening. Although Freeman did not suffer a direct hit, the tornado severely damaged the substation and lines feeding the hospital, forcing it to run on generator power. It was imperative repairs be made quickly, as the hospital was inundated with injured residents, including the patient volume from St. John’s Hospital, which had been completely destroyed by the storm. Within 12 hours, due to the incredibly hard work of both vegetation management crews and line crews, a new line was created to bypass the damaged areas so the hospital could receive direct service.

The devastation and loss from the tornado were overwhelming.

During the first week after the storm, the full complement of vegetation management crews worked 16-hour days to restore the system. Amazing progress was made, and Empire was able to release some crews back to their regular posts after one week. After only 10 days, all customers who could receive power were back on Empire’s service. A few days later, only reactive crews were still addressing the sporadic calls in the tornado restoration area.

In comparison to ice storms Empire and Wright Tree Service had dealt with in the past, the tornado was much smaller and confined to a specific geographic region.
“Attitudes changed drastically with this event, since many of the crews had family members, friends and coworkers that were affected,” said Grossman.

“Emotionally, seeing the devastation every day did wear on the crews. With ice storms, you know everybody’s going to be okay. You just have to wait for the power to be restored. The tornado caused so much damage, and some people had lost everything they owned. It was very tough to see.”

After visiting Joplin within a week of the tornado and twice more over the past year, Wright Tree Service President and COO Will Nutter says he has seen the evolution of the city and the people.
“In my conversations with our employees, as well as the Empire employees, they want all of us to see how far they have come in such a short time,” Nutter said. “You can feel the pride within the community when they talk about how quickly the businesses were reopened or rebuilt. This is a classic example of how previous storm restoration prepared the Empire and Wright Tree Service teams to roll up their sleeves and do whatever was necessary to provide service to the community.” 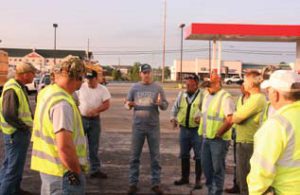 Plan your work and work your plan. Tailgate sessions prior to commencing vegetation management work helps to assure a safe and productive work day.

Work in the tornado area continues for Empire. As neighborhoods rebuild, poles and lines go back up to serve the needs of these customers. One year later, the utility reports that 95% of its primary lines have been restored in the tornado-ravaged area.
“It will take many years to rebuild our system. It was incredibly devastated by the storm,” said Mackey.

“Our goal is to get each customer back on as soon as we can. We know this will be possible with the help of our contractors, like Wright Tree Service, who understand the community and have the same goal. It will take time, but we remain committed to serving our customers. ” 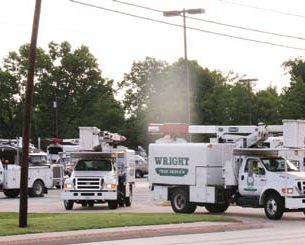