It is a rare occasion to hear of someone working at the same company for their entire career, but for Doug Vondal that is exactly the case and has been for 43 years.

Doug started with Wright Tree Service (WTS) in Cedar Rapids, Iowa at just 18 years of age and only seven weeks out of high school. In addition to his impressive longevity, Doug is a WTS legacy thanks to his dad who worked for WTS for 40 years before retiring. “I originally wanted to be an auto mechanic,” Doug said when asked why he followed in his dad’s footsteps. “But I remember hearing that WTS was hiring and was always intrigued by my dad’s job. I told the division supervisor, ‘I’m the guy you want for this job.’ He hired me on the spot.”

A driving factor of the job for Doug was the opportunity to work outdoors. This was also mixed with seeing his dad do the work and, in Doug’s words, being a “stubborn kid” who wanted to try out the job. He always knew it was something he could do, but he never imagined it would turn into a lifelong career.

Through the years, Doug has climbed up the ladder at WTS, working first as a groundworker truck driver, then groundworker, moved up the climbing ranks to journeyman, crew leader and finally to his current role of general foreperson. Even with the growth and change in the company over the years, the opportunities for advancement have always been consistent, which is something that Doug has always appreciated. “It doesn’t matter what you do or where you start, there is always more to learn,” says Doug.

One thing that stands out to Doug about WTS is not only the commitment to the work being done, but the commitment to safety while on the job. “I’ve been around for 40 years of changing equipment and a changing industry, and these changes have made the job easier and more efficient,” says Doug. “That being said, we still start each day with a ‘stand down’ to go over factors of the work to be done and reminders on how to take care of ourselves and each other.”

Doug’s favorite part of his job is getting to share his knowledge and experiences with the crews he works with. “I’ve really just enjoyed the company over the years and watching the progress and growth,” he says. “I’ve met a lot of people and I think I have made lasting impressions on them.”

With a career like Doug’s, it’s hard to imagine WTS without him. As for when he might retire, he isn’t sure yet. “As long as my health holds up, I’d like to stay a little while longer,” Doug says.

Whatever the future holds, we are grateful that Doug chose a lifelong career with Wright Tree Service. Thank you, Doug, for your dedication to your coworkers and this company! 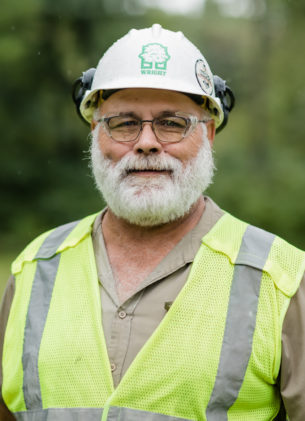