According to the Tree Care Industry Association, 39 percent of all tree worker fatalities are caused by electricity, making it the leading cause of tree worker fatalities. In April, 40 Wright Tree Service (WTS) trimmers working on Xcel Energy property observed electrical safety demonstrations performed by Connexus Energy at the Xcel Energy facility in Whitebear Lake, Minnesota.

Connexus Energy developed the demonstration program and the company’s high-voltage safety demonstration trailer to help increase electrical hazard awareness and to educate about what precautions need to be taken when dealing with electrical conductors. These demonstrations are routinely conducted by Connexus and shared with utility line clearance workers as well as the general public so that everyone is aware of the potential dangers of contacting a power line.

During these demonstrations, Terry McAlpine, the public safety administrator atConnexus Energy, and Tim White, a Connexus Energy lineman, identified the dangers associated with a live power line. Below are two examples Terry and Tim demonstrated. 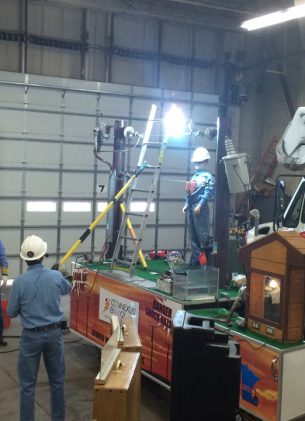